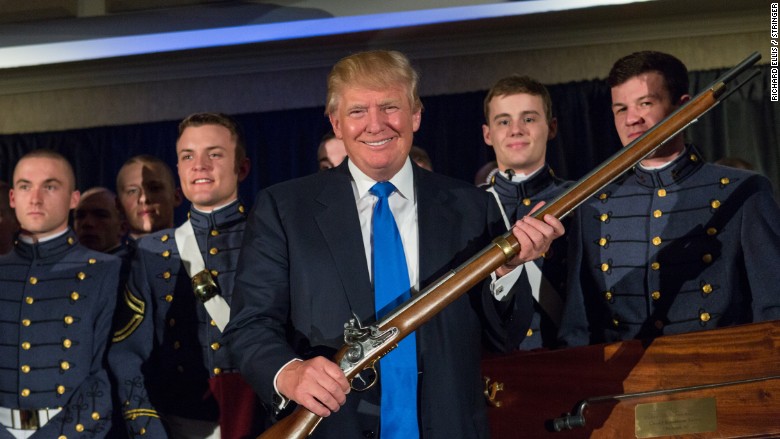 In authored, Guns, Guns and Violence in America, Op-Eds, Race
By Tamika Franklin

Dwyane Wade's cousin was just shot and killed walking her baby in Chicago. Just what I have been saying. African-Americans will VOTE TRUMP!

Trump’s missive drew widespread condemnation for its opportunism and insensitivity, particularly in the context of Chicago. Shootings in the city surged more than 88 percent in the first three months of 2016 alone.

The furor that ensued after the tweet raised an important question: How would Trump’s gun policies affect life for communities of color in cities like Chicago?

Now, however, the New York real estate developer positions himself as the defender of even the most extreme gun rights as part of his broader transition to a guardian of law and order.

“I alone can fix it,” he told a national audience in his Republican National Convention acceptance speech, casting himself as the candidate of law and order. In the aftermath of the Orlando shooting, he made far-reaching statements that patrons should bring loaded guns with them into nightclubs. His claims prompted even the National Rifle Association, a group that endorsed Trump, to respond saying that the candidate defied common sense.

According to an interview with a far-right French magazine, Trump now carries a weapon with him at all times. He also named a vice presidential nominee, Mike Pence, who repeatedly voted to block liability lawsuits against gun manufacturers and boasts an A rating from the NRA.

As a gun violence researcher, I believe epidemic rates of American gun injury and death would get even worse if the positions Trump now claims to support are translated into national policies.

For instance, in sharp contrast to positions outlined by Hillary Clinton and vice presidential nominee Tim Kaine, Trump promises to eliminate most gun and ammunition regulations. This includes regulations that monitor sales of the assault-style rifles that have been used in practically every recent mass shooting, and in recent killings of police officers.

These popular, military-grade rifles, which were subjected to federal ban until 2004, are the weapons of choice for criminals and terrorists seeking mass casualty. The firearms are capable of accurately firing many rounds of ammunition in short bursts.

For these reasons, many states and cities such as Chicago regulate their sale and use. Yet under a Trump administration, such regulations could be in jeopardy. Trump’swebsite states, “the government has no business dictating what types of firearms good, honest people are allowed to own.“ It is unclear exactly how he would enforce such restrictions on states or come up with a standard of “good honest people,” and particularly so without the use of background checks.

Trump also supports a so-called national right-to-carry permit that allows gun owners to conceal and carry anywhere in the United States. This position could effectively make it illegal for cities like Chicago, or states like Illinois, to pass their own laws regulating guns. He also advocates for expansion of controversial “stand-your-ground” laws, and minimizes the rights of states to revoke gun permits.

So too, the Trump campaign rejects expansion of the federal background check system. This, despite the fact that most Americans – as many as 92 percent in a recent CNN poll – support requiring criminal background checks on all gun sales. Data also suggest that states where background checks are required have half the gun-related gun suicide, domestic violence, trafficking and violence against the police as states that do not. One study by the Johns Hopkins Center for Gun Policy and Research found the murder rate in Missouri jumped 14 percent after the repeal of a state law that required anyone purchasing a handgun to obtain a permit showing they had passed a background check.

Trump also supports the elimination of all gun-free zones. “I will get rid of gun-free zones on schools,” he said at a campaign rally earlier this year. His position would end long-held and often successful efforts to limit firearms in places like schools and classrooms, military bases, airports and even inside the RNC convention. For instance, advocacy groups that track classroom gun violence report that gun-free zones have been highly effective in minimizing gun homicides on college campuses.

Changing the law of the land

Perhaps most important, Trump’s promises to appoint Supreme Court justices who will assure that these policies become the law of the land for generations to come. Indeed, Trump released a list of staunchly pro-gun potential Supreme Court nominees as a sign of his commitment to upholding the Second Amendment while speaking at the recent NRA convention.

If brought to reality, I believe Trump’s positions would worsen a state of affairs in which the U.S. has by far the most privately owned guns and the highest rates of gun violence among developed nations. Gun proliferation and increasingly lax gun laws would undermine his newly found commitments to promoting safety, law and orderfor the people of Chicago and elsewhere. Research consistently shows that more guns lead to more death, and particularly so among communities that Trump now says he aims to protect, such as African-Americans, people who live in “inner cities,” people with mental illness and even the police.

More broadly, Trump’s Twitter misstep and series of related comments raise questions about the candidate’s commitment to actually improving the lives of communities of color. Rather than offering solutions that might stem the epidemic of gun violence, the policies he supports could make life markedly more dangerous for everyone.

This article was originally published on The Conversation.

Read the Guns in Donald Trump’s America, Published on August 29, 2016