PUBLISH DATE: MARCH 2019 – In the era of Donald Trump, many lower- and middle-class white Americans are drawn to politicians who pledge to make their lives great again. But as Dying of Whiteness shows, the policies that result actually place white Americans at ever-greater risk of sickness and death.
Physician Jonathan M. Metzl’s quest to understand the health implications of “backlash governance” leads him across America’s heartland. Interviewing a range of everyday Americans, he examines how racial resentment fueled pro-gun laws in Missouri, resistance to the Affordable Care Act in Tennessee, and cuts to schools and social services in Kansas. And he shows these policies’ costs: increasing deaths by gun suicide, rising dropout rates, and falling life expectancies. White Americans, Metzl argues, must reject the racial hierarchies that promise to aid them but in fact lead our nation to demise.

In The Protest Psychosis, psychiatrist and cultural critic Jonathan Metzl tells the shocking story of how schizophrenia became the diagnostic term overwhelmingly applied to African American men at the Ionia State Hospital, and how events at Ionia mirrored national conversations that increasingly linked blackness, madness, and civil rights. Expertly sifting through a vast array of cultural documents from scientific literature, to music lyrics, to riveting, tragic hospital charts Metzl shows how associations between schizophrenia and blackness emerged during the 1960s and 1970s in ways that directly reflected national political events. As he demonstrates, far from resulting from the racist intentions of individual doctors or the symptoms of specific patients, racialized schizophrenia grew from a much wider set of cultural shifts that defined the thoughts, actions, and even the politics of black men as being inherently insane.

Prozac on the Couch

Prozac on the Couch traces the notion of “pills for everyday worries” from the 1950s to the early twenty-first century, through psychiatric and medical journals, popular magazine articles, pharmaceutical advertisements, and popular autobiographical “Prozac narratives.” Metzl shows how clinical and popular talk about these medications often reproduces all the cultural and social baggage associated with psychoanalytic paradigms—whether in a 1956 Cosmopolitan article about research into tranquilizers to “cure” frigid women; a 1970s American Journal of Psychiatry ad introducing Jan, a lesbian who “needs” Valium to find a man; or Peter Kramer’s description of how his patient “Mrs. Prozac” meets her husband after beginning treatment. 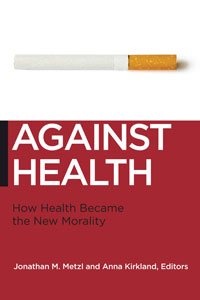 argues that health is a concept, a norm, and a set of bodily practices whose ideological work is often rendered invisible by the assumption that it is a monolithic, universal good. And, that disparities in the incidence and prevalence of disease are closely linked to disparities in income and social support. To be clear, the book’s stand against health is not a stand against the authenticity of people’s attempts to ward off suffering. Against Health instead claims that individual strivings for health are, in some instances, rendered more difficult by the ways in which health is culturally configured and socially sustained.

The book intervenes into current political debates about health in two ways. First, Against Health compellingly unpacks the divergent cultural meanings of health and explores the ideologies involved in its construction. Second, the authors present strategies for moving forward. They ask, what new possibilities and alliances arise? What new forms of activism or coalition can we create? What are our prospects for well-being? In short, what have we got if we ain’t got health? Against Health ultimately argues that the conversations doctors, patients, politicians, activists, consumers, and policymakers have about health are enriched by recognizing that, when talking about health, they are not all talking about the same thing. And, that articulating the disparate valences of “health” can lead to deeper, more productive, and indeed more healthy interactions about our bodies.

100 Must-Read Books About The History of Medicine